Couldn’t believe my eyes when I went to do this update and realized it has been 3 months since I sat down and jotted out the life & ministry happenings of the Houck crew.  I would love to blame it on age, bad rice, even the language barrier would sound pretty convincing (if this was written in Spanish).  But alas, it is all for not.  For family this has probably been like searching the nooks and crannies of a “Where’s Waldo” cartoon.

March went out & April came in with a bang.  Well, actually more life a 24/7 caffeine fix.  Our friend Sarah Stewart flew down from Winnipeg and spent a couple weeks experiencing life and ministry with us.  Did I mention she manages a Starbucks…Insomnia WIN! Week one was life – it was Spring Break and we were ready for a little R&R.  After picking Sarah up at the Puerto Plata airport we spent a couple days taking in the rays at what is becoming our favourite getaway – Cabarete Beach.  Once we had our fill of salt air we trekked back to Santiago via a beautiful mountain road with such memorable sights as donkeys tied to trees, ‘laundry day’, and lest we forget, the “Lost Gringo Saloon”. 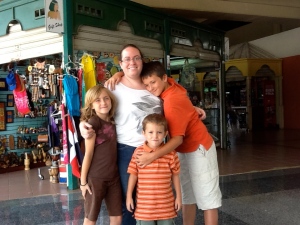 While in Santiago Sarah experienced the ins and outs of Santiago Christian School, and the New Hope Girls Academy, grocery shopping in a foreign language, and put on an all-staff coffee night at our home.  Thanx Sarah for the fun and treats!  Our family and our ability to stay alert via Starbucks  beverages the harsh during winter months in the Dominican thank you 🙂

April & May were also months filled with athletic ventures.  The Lord has really used Tracey to make an impact in the lives of so many children through her P.E. classes.  Now, I’m the first one to raise an eyebrow at something Phys. Ed. Class = Spiritual Growth, but I am impressed.  To see how much time, energy and prayer she puts into creating a whole person experience is only overshadowed by the opportunity she takes to grab on to a teachable moment with an encouragement or lesson from the Bible.  It’s crazy and awesome to think she has a captive audience multiple times a day and is intentionally looking for those opportunities.  Her impact, through her faith in Christ, is seen and has been noted by students, staff and parents alike.      You go girl!  Give’m heaven!!

This was the first year in many that I was back on the bench coaching basketball.  The rust was evident but the guys were great to work with.  Myself and the assistant coach, Matt Vryhoff are both ‘blue collar’ type players.  Outside of never hearing that term before, the guys definitely had a different approach.  You could almost hear the sound of 747’s flying overhead as 3-point shot after 3-point shot was put up.  It took alot of wrestling internally for us as a group to shift our style.  In the end, it was a very cool transition to be part of. 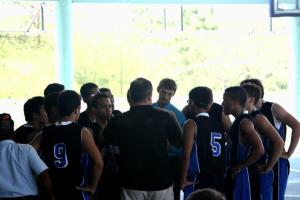 Decision day…yes or no to the toupee?

The guys themselves became a crew that we as a family grew to love.  A couple of the guys are deeply imbedded in their faith in Christ.  And others are asking good, challenging questions along the way.  Spending the amount of time together that we did provided a transparent mirror image of our real hearts and motivations.  Some, I am thankful for.  Others, I’ve apologized to team.  In all, I am very much looking forward to coaching next season and watching these young men transform personally, athletically, and spiritually.

Our most memorable athletic highlight was hosting the Quisqueya Christian School basketball team from Port-au-Prince, Haiti (http://quisqueya.org/)  Little did we know they were both undefeated and the #1 high school team in the country as they arrived.  And yes, we did have our empanada’s handed to us on a banana leaf platter, but we genuinely didn’t mind.  These guys were so nice, so humble, and so disciplined we couldn’t be upset about a 40 or 50 point loss (yep…it was that painful:).  They blew everyone away on and off the court.  But you would never see them bragging, talking trash, and egocentric.  They demonstrated great character and shared openly of their faith in Christ at half-time of our  game.  Hats off to you Quisqueya…look forward to seeing you again next year.

On the ministry end of things, we began the pavement pounding process of looking into not only more of the Velocidad one-night youthworker seminars, but also…maybe…could we…possibly…pull off the first all-city Youthworkers Convention?  That would be a dream come true and one that I will tell more about in next month’s blog…dum dum dum dummm!

The kids, not to be outdone ran full steam right to the end of the year.  One major difference we found with Santiago Christian School is you teach and are taught up to the last day.  Gone are the days of baseball in French class or kick-ball in Math for the last week.  It was good for them and us.  All three are now heading into a transition year.

Carter graduated 6th grade which is very much celebrated in the Dominican.  Complete with a formal graduation evening, pomp & circumstance and the very cool tradition of Mom’s ushering their sons (and dad’s ushering daughters), Carter strolled to the front, gathered his hard-earned diploma, and celebrated!  We are so proud of you big guy!!!  Now it’s on to Middle School with all of it’s challenges and joy’s.  Give’r buddy!!

Carter also wrapped up his first season as the only 6th grader on the Jr. Varsity basketball team.  It was learning curve and half for him but he went after it.  The guys were bigger, faster, stronger, and more athletic than any he had ever played against.  And, even during those gut-wrenching times when you wonder if all this effort is worth it when you’re ‘riding the pine’ (sitting) more than you’re used, he talked things through with his coach, prayed about it.  Thank you dearly Mark Widmere for pouring your life into our son.  You have been a wonderful and trustworthy spiritual mentor to Carter.

We pause this blog for an important message….“MORE MOTO’S of the DR”

Amber, not to be outdone, paced herself to an uber great year in 2nd grade.  She racked up spelling words and overall grades that were “awesome” to use her words.  And, while she continues to be her sweet self, and unassuming wild side has begun to emerge.  She jumped into ‘ballet’ with friends in an after-school program taught by one of the teachers and excelled.  She even had a little performance in which she looked beautiful.  It’s that wild side though that made us wonder.

One of Amber’s gifts is making others feel welcome and loved.  For her birthday party in May she invited her ‘posse’ overnight to celebrate turning 8 years old!  Unbelievable.  Growing up so fast.  Too her credit she has made some wonderful friends.  We had the ‘United Nations’ girls sleepover party which came loaded with going out to watch a play… coming home for sugar in take…taunting her brothers with the gifts and fun she was having…and, well, whatever else little girls like to do at an overnighter. We love you little 8 year old and are excited about what’s in store for you next year! 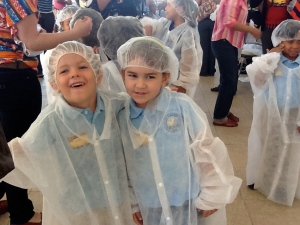 And then there’s Drew.  Nicknamed, “Little Sugar” by his teachers for adding sweetness wherever he goes & motivating the other students in his class.  Drew officially moves into Kindergarten next school year and is more than ready for the challenge…according to him.  On his fifth birthday back in March we had some longer-term convincing to do when Drew announced, “I’m 5 now.  I can go to Kindergarten”.  The concept of waiting until the next school year wasn’t in his plans.   Now was better.  We worked through that and Drew finished his school year off very well.  He and I even had the chance to tour a local cookie factory.  It was interesting to see the process but even more interesting to see how forward industry in the Dominican is moving forward and progressing.  It was a great day.

The school year wrapped up with Tracey moving into full-time P.E. classes for the fall.  She’ll be taking on all the K-5th grade P.E. classes.  Something she will excel at.  Myself, I am taking on the role of Chaplain at SCS.  It’s a new position and the melting together of various current and new endeavours (i.e. on-campus women’s bible study?  Yep…that’s a new one on the resume).  The kids, as mentioned, are moving a grade up.  And the language barrier is becoming the language understood.  Slowly but surely we’re getting better.  We can only grow from here.

Thanx again, as always for your prayers and care.  I’m so sorry this update took so long to get to you.  Another update will be coming the end of July and will have lots to say about the Grace Mission team we hosted, camp speaking, family reconnecting as we visit home over the summer.

For now, please know we love you and look forward to visiting in person!

Rainbow over our school campus

Blessings from the Houck crew!!